About me and my racing history…

I am 31 years old and from Leeds, West Yorkshire. I was firstly introduced to motorsport 16 years ago (2003) when my racing career began. Since a very young age I have always been interested in racing, however through being able to race myself my passion began to grow.

At the age of 16 I competed in the National Autograss Championships using a 1000cc mini for the junior class (ages 12-16). Unfortunately, I only managed one year in the junior class due to my age but did end up finishing 18th overall out of 128 competitors.

I continued to successfully race in the National Autograss Championship for 7 years in a variety of cars in different classes, however I mainly competed in a fully space framed Peugeot 106 with a 200 BHP Vauxhall engine which ran in the class 6 category.

Over the years I had many championship wins including National Champion title which made me want to set my sights higher for my racing career.

In 2013 with the idea to defend my current Suzuki Swift Rally Cross title I once again raced in the championship. However, half way through the season I had the opportunity to compete in the Super 1600 Championship run by MSA, this was something not to ignore therefore I went on to compete in this Championship and with winning four out of the four rounds I competed in I finished the season in 2nd place.

2015 gave me the huge opportunity to have a year out working with a BTCC team, Power Maxed Racing. This developed my skills with quick thinking, tactics and stamina to achieve. I also managed to go back to my Autograss roots and race in a Nissan Micra for the weekend where I finished 1st. overall.

I have also attended events with the Suzuki Swift:

The change from Autograss to Rallycross I didn’t know what to expect, all I could do was go out and do my best.

All about the Civic Cup…

The Championship is one of the most renowned and well patronised clubman racing championships in the UK. Since its formation in 2011 as a series, the Civic Cup has grown to become the headline event at any race meeting it visits drawing significant spectator crowds both in person and online. 2018 has been the best season to date and provided some incredibly close and entertaining racing. Followers have been gripped over the 14 rounds, with the championship being decided at the final round of the year. There has been 9 different race winners and the number of different podium winners shows just how close the racing is. 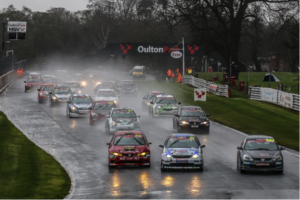 Now for the cars. They are made up of UK domestic model EP3 and FN2 Civic type Rs. They have exploded in popularity over the past 12 months, largely due to its cost-effective build spec, yet offering incredible levels of performance. Powered by standard K20a2 or K20z4 with limited and closely regulated bolt on parts generating 230BHP the 2000cc Civics are arguably the most closely fought single make saloon car championships in the UK today.

I have put together a few sponsorship packages/prices for your interest. I understand the costs are high but with the sponsoring opportunities I have to offer, if you choose to sponsor my car you could have many benefits:

Why choose to sponsor…

You may ask what benefit your company will get in sponsoring a motorsport team? Well here’s a few little bullet points to help:

If you feel that you would like to support us throughout the 2019 season, we have a wide range of packages that are available to suit all requirements.

If you require any more information, please do not hesitate to contact myself or Jen Bateman.

Thank you for your time.